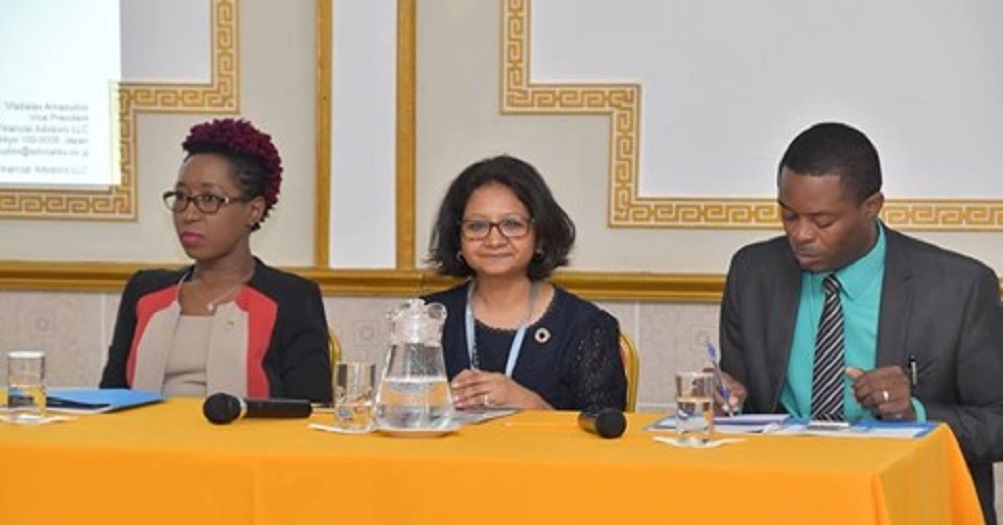 The Office of Climate Change (OCC), in collaboration with the United Nations Development Programme (UNDP) and the Government of Guyana (GoG) facilitated discussions with key stakeholders to finalise the official guidelines for the reduction of Green House Gas (GHG) emissions for municipalities across Guyana.

The guidelines were defined in the final draft of the Nationally Appropriate Mitigation Actions (NAMA): Greening of Towns in Guyana. The NAMA document was the centre of discussions, at the one-day validation workshop, held today, at the Regency Suites Hotel, Hadfield Street, Georgetown.

Head of the OCC, Mrs. Janelle Christian said that the participation of municipality heads is crucial to the implementation process. “For Guyana, this is the first time that we are actually going to be preparing for this NAMA but the process that would have shaped this initiative started in 2016, September, when with the collaboration with UNDP we hosted the first NAMA workshop... It’s not by accident that we have chosen to focus on renewable energy… We felt that it was important for us to work with the leaders of the township because many times we elaborate national documents and implementation is being done at the national level… Climate change actions are required at all levels and principally at the local Government level because most instances it’s the communities that are affected as a result of the consequences,” she said.

Mrs. Christian said that today’s validation workshop will be a show of Guyana’s ambition toward becoming a ‘green’ State. “A great part of this requires resource mobilisation not only from Government, not only from budgeting, but also the ability for us to demonstrate to our development partners that we are serious about moving along this trajectory. We have great ambition, but it will remain ambition if we do not act… After today we hope to receive your input, conclude what the consultant would have captured over the last year and a half and [see] where there are gaps. We will be able to fill those gaps, address those gaps, and put our hands together to ensure the successful implementation of Guyana’s first NAMA moving towards the greening of towns,” she said.

Deputy Resident Representative of the UNDP, Ms. Shabnam Mallick, while delivering brief remarks, said that the validation workshop brings Guyana one step closer to achieving the United Nations’ Sustainable Development Goals (SDGs). “As Guyana modernises, Guyana’s towns and cities will produce a growing share of greenhouse gases and other negative by-products of development. Thus, it is important that Guyana continues to make strides in addressing climate change. These efforts will contribute Guyana evolution into a green state by also progressing toward the achievement of the Sustainable Development Goals,” she said.

Ms. Shabnam also said that the UNDP is supportive of Guyana’s ‘green’ endeavours. “[The] UNDP has considerable international experience and stands ready to support you in taking the next steps in helping formulate the actual project documents for intervention in specific areas in the NAMA framework and helping to create favourable market intervention in the environment and scalable business models for investment in energy efficiency and rural renewable energy solutions,” she said.

Head of the Association of Municipalities, Mr. Carwyn Holland said that all levels of Guyanese society have the power to make changes that will positively impact the environment. “Implementation of mitigation actions requires changes at all levels of society… Our youth possess both the long-term interest and viability to become critically involved in the implementation process… I champion the call for all of society to become engaged in the consistent implementation of the NAMAs… The hopeful truth is that we are not powerless. The power and potential to curb the effects of climate changes still resides with each of us and it requires collective effort and the will to incorporate often, small changes, that will add value to our lives” he said.

In an invited comment, Mayor of Bartica, Guyana’s Model ‘Green’ Town, Mr. Gifford Marshall said sensitisation is a key factor in the participation of the townspeople. “It starts with the young people and we are working in the schools… We’ve had debates, spelling bee competition… we’re using those as forums to sensitise the young people and get them involved… Sensitisation is key and it is something that we have to continue to do… This whole ‘green’… concept is something new to… the people. So… capacity building is very, very important,” he said.

International Development Advisory Consultant, Mr. Vladislav Arnaoudov, in an invited comment, shared his hopes for the implementation of the NAMA. “After I finish my work... the report that is produced remains just as a report… that stays on somebody’s shelf and collects dust. This is what I want to avoid… What I want to achieve… [for this] this report [to be] owned by all the towns in Guyana, that they actually understand what is there, that they take over the initiatives that are described there… What I hope… is that the towns get this information, get this ‘greening’ initiatives and they implement [the initiatives],” he said.

The NAMA validation workshop was attended by the Mayors and Regional representative from Mabaruma, Lethem, Bartica, Linden, Mahdia, and New Amsterdam. Also in attendance were representatives from the Ministry of Communities, Department of Environment, the Guyana Energy Agency, the Guyana Association of Municipalities, Guyana Water Incorporated, and the Guyana Manufacturing and Services Association.