The Office of Climate Change (OCC) continues to implement and execute projects articulated in the Low Carbon Development Strategy (LCDS), mainly since these are tied to the bilateral agreement between the Government of Guyana and the Kingdom of Norway.

Head of the OCC, Janelle Christian, speaking recently on the advancement of several of these projects said: “the whole thing is what is good for Guyana, what is good for the country and how we manage our resources, how do we address the gaps in governance and other legislative and policy areas.” 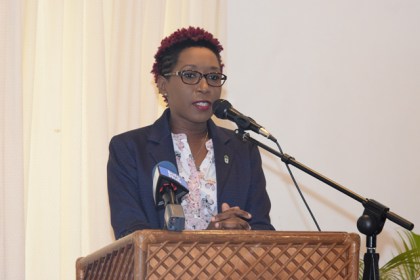 She noted the Office is building on all the work conducted over the years under the LCDS while ensuring that development is approached across all sectors along a low emissions path, as stipulated in the Green State Development Strategy (GSDS).

The OCC is ramping up all the work started under the LCDS with the focus on Guyana emerging into a truly ‘green state’.

Christian informed that the Project Management Office, which leads the process with respect to identification and elaboration of proposals for submission to the Guyana REDD+ Investment Fund (GRIF) Steering Committee, would have successfully, in 2017, received approval for the Information and Communication Technology (ICT) Hinterland Connectivity Project.

The Office has also advanced the process of the National Opt-in Mechanism, successfully completing consultancy in 2017, which has led to the development of a framework document.

“We are looking to continue that initiative in terms of having more country-wide engagement with communities and also seek to do some piloting,” Christian said.

Another priority of the LCDS which has progressed is the recently launched Sustainable Land Development Project which deals with land use planning and governance, Christian highlighted.

Importantly, the OCC with support from its partners has conducted work in the Upper Takutu/Upper Essequibo Region (Region Nine) in the area of water resource management.

A pilot project is being financed under the Japan-Caribbean Climate Change Partnership (JCCP).

According to the OCC Head, “we are going to be undertaking the assessment, the Ground Water Hydrology Assessment to have a better understanding of water resources in that area and then come up with the best solution to address the scarcity that the communities experience there”.

Information and data coming out of that pilot project will then inform a larger programme.

Christian alluded to several other important projects coming out from the LCDS, which fall under the Ministry of Natural Resources such as the Extractive Industries Transparency Initiative (EITI).

Guyana’s application to become an EITI candidate was approved in October 2017 during the 38th Extractive Industries Transparency Initiative Board Meeting held in Manila, Philippines.

The LCDS is a national strategy launched in 2009, under the previous administration, which seeks to create a low deforestation, low carbon, climate resilient economy with the objective of transforming the economy while combating climate change, mainly through incentives to avoid deforestation.

The policy document titled ‘Framework of the Guyana Green State Development Strategy and Financing Mechanisms’ was completed in April 2017 and is intended to provide guidance on the prioritised areas to be developed in the GSDS.

The document represents a roadmap for Guyana’s development along a reduced emissions pathway and builds on the successes of the LCDS and several other national documents such as the Nationally Determined Contributions, Climate Resilience Strategy Action Plan (CRSAP), Draft National Energy Policy, and National Adaptation Strategy for the Agriculture Sector (2009 -2018).