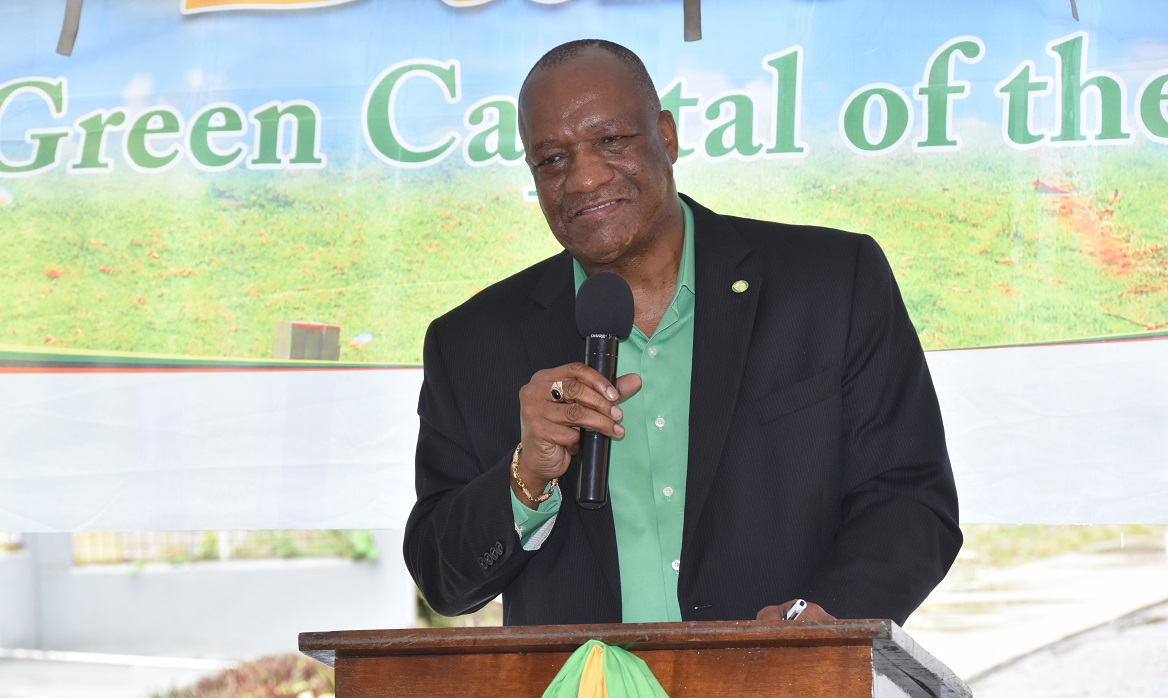 Minister of State, Mr. Joseph Harmon, today, said that the Government of Guyana is committed to seeing the town of Bartica become a model of ‘green’ development, not only in Guyana but the entire Caribbean region as he launched a US$650,000 project, which is aimed at establishing a reliable point of reference for the existing state of energy use in Bartica.

The financing was received from the Government of Italy in support of the Model ‘Green’ Town, Bartica Project. The data generated from this pilot will be used for future measurements and predictions for evidence-based decision-making and pursuance of projects and programmes. The project will be divided into two phases: In phase one, which is expected to last an average of 12 months, all the energy audits will be completed, public awareness exercises completed and energy data management centre established. To the degree possible, some small-scale pilots/demonstrations will commence. In phase 2, the information gathered will be utilised to undertake the demonstration projects and scale up, where possible.

Minister Harmon, who delivered the feature address at the launching ceremony held, earlier today, outside the Mayor and Town Council of Bartica, said that the project is a demonstration of the Government’s continuing efforts towards the achievement of the vision of becoming a green state. This, he said is being done through the design and implementation of innovative solutions, first in Bartica, for equitable and inclusive social and economic development and utilisation of the country’s natural capital.

Bartica must lead the way as a model town in areas of alternative energy including solar, wind and hydropower, solid waste management and economic diversification. It is our vision that this community will serve as an example to other towns and regions across the country. Bartica will be a microcosm of what greening is, not only in Guyana but the entire region. So as a Government, the President has committed that political will to the development of what is taking place and so Bartica will continue to see this type of development,” Minister Harmon said.

The conceptual Green Bartica Development and Land Use Plan, Minister Harmon said, provides for two inter-related actions; the modernisation and industrialisation of Bartica, which must be driven by reliable and clean sources of energy.

“When we speak of modernisation we envision retrofitting current investments to meet green economy standards and climate-proofing all investments carried out, within the framework of sustainable urban planning and management, which promotes interconnected green spaces, multiple transportation systems and mixed use development,” he said.
The Minister of State said that access to available sources of energy is indispensable for investment and expansion of all of the country’s productive sectors and will serve as driver of diversification for Bartica.

With direct reference to the project, Minister Harmon said that sound decision making with respect to alternative energy in Bartica through private direct investment and the Government of Guyana’s investment is dependent on this data.

“It must be based on imperial data. People think it is okay to sit in their offices in Georgetown and make decisions, but you have to come on the ground and that’s the basis of gathering baseline data,” Minister Harmon said.

Minister Harmon urged the residents to get as involved as possible in the project, as he noted that they are the beneficiaries and must, therefore, take responsibility not just for the project but for the entire transformation. “The transformation is your responsibility. As we celebrate World Environment Day, today, let us reflect on the benefits provided by the environment and seek to be good stewards of nature,” the Minister said.
Minister Harmon also used the opportunity to publicly commend Mr. Ajay Bhyro of Four Miles Housing Scheme, Bartica, whose business and home are fully solar powered. Mr. Bhyro said that he is supportive of the Government's 'green' agenda and urged other Guyanese to follow suit.

Meanwhile, Mayor of Bartica, Mr. Gifford Marshall, in his remarks, said that the Town has noted the Government’s drive and fully throws its support behind the pursuit of a ‘green’ town and ‘green’ agenda. He noted that as the world continues to grapple with the effects of climate change and global warming, it is the duty of every individual to play a role in the mitigation and adaptation efforts.

“Sound environmental practices are pivotal to reducing the impacts of Climate change. It starts with us, the model town, the dumping of bottles, tyres, drums and other receptacles in our drains, the disposal of solid waste in unregulated dumpsites… are all against environmental practices.Further, the development in the Kaieteur National Park (KNP), the continued pollution of our rivers by mining, deforestation, land degradation and our continued addiction to fossil fuels are all threats to the environment. We must accept and realise that the only way is ‘green’ solutions. ‘Green’ solutions are needed to address the challenges and threats facing our country. Bartica will be an example to the rest of the country and Caribbean as a ‘green’ town. It must be a seen as Guyana’s pilot ‘green’ project,” the Mayor said.

As the Town continues to push ahead with realising the Government’s vision for a model ‘green’ town, Mr. Marshall said that the Council will be looking to work on sustainable land use planning, the development of Protected Areas and the drafting and implementation of ‘green’ building codes.

“We have to make a change and that change must start here in Guyana, with us here in Bartica. We have a responsibility and we cannot continue to look to Central Government for every need and we have to show them that we are serious when they put resources into this town,” he said. 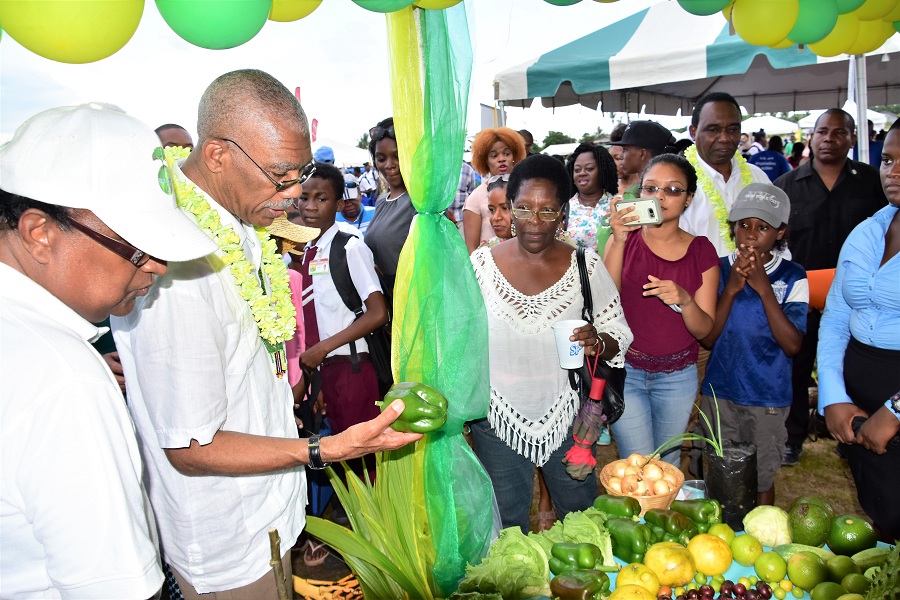 Ms. Janelle Christian, Head of the Office of Climate Change (OCC), which is the lead agency on the Government’s Climate Change commitments, said that this project is located within the agenda of the Green Economy Framework within Guyana’s overarching sustainable development architecture. She noted that Bartica will be the laboratory for piloting all ‘green’ innovations.
“At the centre of development is cheap, renewable energy and so we felt that we at the OCC, which is mandated to lead Government’s efforts with regard to climate change mitigation and adaptation, must provide the means and work with our development partners to leverage resources to make Government’s vision a reality. We felt that is our responsibility to see how best we can work with Bartica to realise the President’s vision. This project will also position us for further and larger infrastructural type projects,” she said.

Ms. Christian noted that Bartica is currently powered by two diesel generators, which consume approximately 700,000 gallons of diesel fuel annually. The project is, therefore, even more significant and timely.

Dr. Kenrick Leslie, Executive Director of the Caribbean Community Climate Change Centre (Five C’s), the implementing agency and partner of the Government of Italy, in his remarks said that it is heartening to see such a project being implemented in the town of Bartica as the country forges ahead with its agenda.

He noted that the Centre shares a friendly relationship with the Italian Government and as such, has been tasked with encouraging dialogue for the next five to 10 years to continue the projects. “So this is just the beginning,” he said.