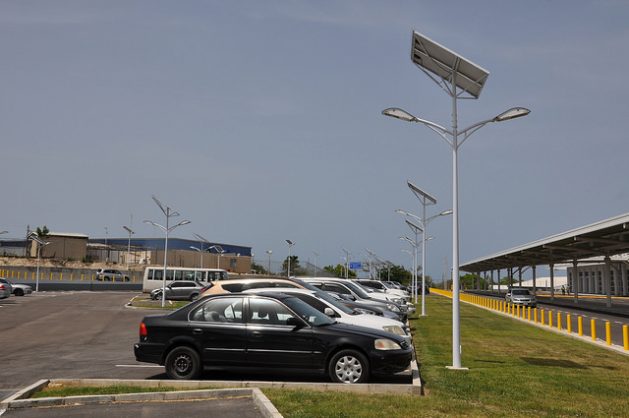 BARTICA, Guyana, Aug 3 2017 (IPS) - At the head of Guyana’s Essequibo River, 50 miles inland from the Atlantic Ocean, you will find the town of Bartica. Considered the gateway to Guyana’s interior, the town has a population of about 15,000 and is the launching point for people who work in the forests mining gold and diamonds.

The implementation of the J-CCCP supports the government’s commitment to transitioning to the use of 100 percent renewable energy in public institutions by 2025.
The Ministry of the Presidency (MotP), through the Office of Climate Change, in collaboration with the United Nations Development Programme (UNDP), launched the Japan-Caribbean Climate Change Partnership (J-CCCP) in Bartica earlier this month.

The Partnership, which is being funded by the Government of Japan to the tune of 15 million dollars, supports countries in advancing the process of improving energy security planning for adaptation to climate change.

Head of the Office of Climate Change within the Ministry of the Presidency Janelle Christian said the partnership comes at an opportune time as it helps to advance the vision of President David Granger for Bartica to be developed as a model ‘green’ town.

“The J-CCCP project and the support that Guyana has been benefiting from and continues to benefit from is set within the framework of the ‘Green’ State Development Strategy (GSDS)… The pilot initiative that will be implemented in Bartica is a direct response to the President’s pronouncement on Bartica becoming the first model ‘green’ town,” she said.

The GSDS provides a framework for national development plans and policies for climate action.

Christian said that the implementation of the J-CCCP supports the government’s commitment to transitioning to the use of 100 percent renewable energy in public institutions by 2025.

“These initiatives have to date, through budgetary support and also resources that we have been able to leverage through our development partners, already started taking effect,” she said.

“The project here in Bartica is not unique to Bartica but it is part of that national programme where we would’ve already seen through the leadership of the Guyana Energy Agency (GEA) some schools being installed with photovoltaic system (PVs).

“Further, under the Ministry of Communities, I believe as part of the initiative for all of the townships, there is and has been budgeted resources for installation of LED street lighting and we felt that those projects must align with those national plans with respect to our achievement and implementation of those commitments that we have made,” Christian added.

United Nations Resident Coordinator and UNDP Resident Representative Mikiko Tanaka said that the launching of the Partnership is in line with Guyana’s ‘green’ development trajectory. “The resources will undoubtedly contribute to enhancing Guyana’s and the other seven beneficiary countries’ ability to respond to climate risk and opportunities,” she said.

The partnership is part of a regional initiative that was officially launched in January 2016 and has been implemented in Belize, Dominica, Grenada, Jamaica, Saint Lucia, Saint Vincent and the Grenadines, Suriname and now Guyana.

Tanaka explained that the partnership is part of the global effort to achieve the Sustainable Development Goals (SDGs) as it relates to the climate action.

“The achievements from this project would ultimately support Guyana’s pursuit of evolving into a ‘green’ state, as it fosters a platform for collaborative efforts . . . the project allows for the adaptation and implementation of mitigation and adaptation technologies, which gives Guyana the flexibility to identify, develop and implement demonstration pilot projects that seek to address significant climate related ramifications,” she said.

Meanwhile, Programme Specialist at the UNDP, Dr. Patrick Chesney said that the partnership is an important response that emphasizes partnership between a developed country and developing countries.

“This is an ambitious response, and we must match that ambition with our energy with our passion and with knowledge. Guyana is the second greenest country on this earth, so the move towards establishing a green state is simply putting in place the architecture, the mechanisms and ensuring that all we do is contributing to making and keeping Guyana green,” Chesney said.

Additionally, Mayor of Bartica, Gifford Marshall praised the organisations for implementing the Partnership in the community, which he said demonstrates the Government’s interest in developing the township of Bartica.

“It is most importantly a visionary council that was elected by the people for the development of Bartica, we are committed to serve, we were elected to serve and that’s what we will do, and these projects of course will bring about major transformation to the township of Bartica,” Marshall said.

Project Manager Yoko Ebisawa said the J-CCCP is designed to strengthen the capacity of countries in the Caribbean to invest in climate change mitigation and adaptation technologies, as prioritised in their Nationally Appropriate Mitigation Actions (NAMAs) and National Adaptation Plans (NAPs).

These technologies will help reduce the dependence on fossil fuel imports, setting the region on a low-emission development path; as well as improve the region’s ability to respond to climate risks and opportunities in the long-run, through resilient development approaches that go beyond disaster response to extreme events, she said.

The J-CCCP brings together policy makers, experts and representatives of communities to encourage policy innovation for climate technology incubation and diffusion. By doing so, the partnership aims to ensure that barriers to the implementation of climate-resilient technologies are addressed and overcome in a participatory and efficient manner.

As a result, concrete mitigation and adaption will be implemented on the ground, in line with the countries’ long-term strategies. Building upon and supported by the NAMAs and NAPs, the partnership also supports the incubation of climate technology into targeted public sectors, private industries, and community groups and enterprises so that green, low-emission climate-resilient technologies can be tested, refined, adopted, and sustained as practical measures to enhance national, sub-national and community level resilience.