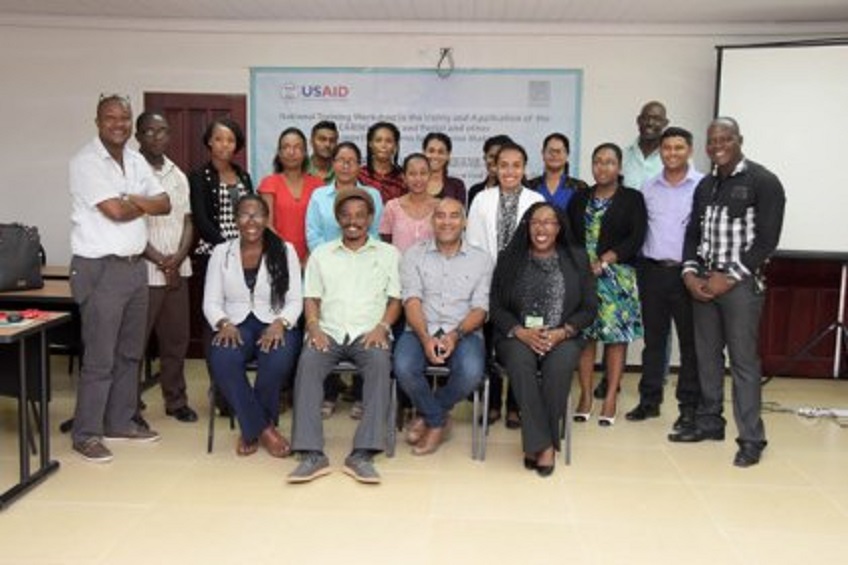 Director of the Department of Environment (DoE), Ministry of the Presidency, Ms. Ndibi Schwiers, today, said that the National Training Workshop in the Utility and Application of the Caribbean Weather Impacts Group (CARIWIG) Tools and Portal and other Supporting Systems for Decision Making is particularly important because it made available several climate models, which can be used to mitigate the effects of climate change. 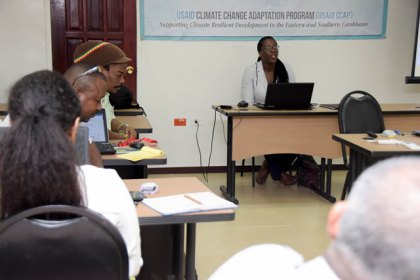 The six-day course aimed to train a cadre of personnel at the national level to promote and encourage the use of scientific information in decision-making, planning and implementation of adaptation initiatives. The workshop was held at the National Data Management Authority, University of Guyana, Turkeyen Campus, East Coast Demerara.

Ms. Schwiers said that the workshop is timely as it follows closely on the heels of the recent hurricanes, which have left several Caribbean states grappling with severe and for some, total destruction. “The recent catastrophic hurricanes, Irma, Jose, Maria, these are timely reminders of how vulnerable we are to climate change. Adapting to climate change through taking appropriate actions to prevent or minimize the damage is, therefore, a major priority for us. This workshop, therefore, is a step in the right direction to ensure that we are prepared to deal with the impacts of climate change,” she said.

Ms. Schwiers also said that climate modelling is important for the future of Guyana’s disaster preparedness, noting that it can serve as an early warning system, especially when faced with the threat of drought. “The models that you were exposed to … have direct relevance to us here in Guyana … As you are aware; a large part of our economy is dependent on agriculture. Thus, drought can have debilitating effects on our agriculture industry and, by extension, GDP … This tool [CARIDRO Caribbean Assessment of Regional Drought], as I understand it, will allow us to predict the occurrence of a drought using two indices … The calculations of these two indices at various time intervals can, therefore, predict the onset of a drought in the future and how severe the impact will be. This therefore, serves as an early warning system for our agriculture and water sectors and [will] allow us to make proactive arrangements for any future event,” she said.

Meanwhile, Scientific Officer, Caribbean Community Climate Change Centre (CCCCC), Belmopan, Belize, Mr. Ottis Joslyn said that the work has started to build countries’ capacities to make scientifically-grounded decisions, with regard to climate change mitigation. “These tools will help you make better decisions because you’ll then be making your decision, making your policy from a science, evidence-based sort of foundation so this is why we developed this tool,” he said.

Livestock Industry Development Specialist from the Guyana Livestock Development Authority (GLDA) of the Ministry of Agriculture, Mr. Michael Welch, explained that the workshop offers tangible benefits for Guyanese at all socio-economic levels. “We are hoping that, with the type of training we have been exposed to, we’ll be in a position to provide data to policy makers so that when decisions are made, they are made based on information. Those policies will then be translated into actual activities so that the community can benefit in terms of resilience, in terms of putting in mitigation interventions that can minimize the impact of climate change on whole communities and Guyana as a whole,” he said.

Researcher, Centre for Atmospheric Physics within the Institute of Meteorology of Cuba (INSMET), Mr. Arnoldo Bezanilla, Communications Specialist, Office of Climate Change (OCC), Ms. Yasmin Bowman, other representatives from the GLDA, the Ministry of Natural Resources, the Guyana Forestry Commission and the Guyana Water Incorporated also attended the workshop.

The workshop was hosted by the Government of Guyana, through the OCC, in collaboration with the Caribbean Community Climate Change Centre.