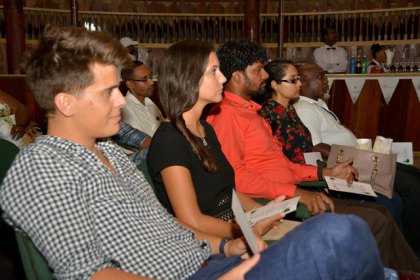 The United Nations Development Programme (UNDP) in close collaboration with the Office of Climate Change (OCC), last evening premiered a 30-minute short film titled “Siege On My Land: Guyana’s Battle with Climate Change,” at the Umana Yana, Kingston, Georgetown. United Nations Resident Coordinator, Ms. Mikiko Tanaka in her welcoming remarks said that while climate change cannot be stopped, if countries and the relevant agencies partner, the impacts can be significantly reduced.

Ms. Tanaka applauded Guyana’s efforts in the fight against climate change and President David Granger’s vision and commitment to transforming the country into a ‘green’ state, “recognising this vast forest of Guyana to the world, to the region as a carbon sink, it really is an honour to be able to work together with a Government committed to this cause of protecting the environment and slowing down global warming…climate change,” she said.

Meanwhile, Head of the OCC, Ms. Janelle Christian said the idea of the film was birthed after it was recognised that there was limited local content on what climate change is and the Guyana experience. “The film is not to introduce new concepts, we already know the science behind climate change, we know what is contributing to it, but the main objective was to produce content where local people, the average person contributed to the production,” she said.

In 2015, after recognising that its awareness campaigns focused primarily on projects, a small unit was established which collaborated with the Project Management Unit, spearheading the regional programme for the implementation of the Japan-Caribbean Climate Change Partnership (JCCP). Cuyuni-Mazaruni (Region Seven) and Upper Takutu-Upper Essequibo (Region Nine) were identified for the adaptation and mitigation pilot projects.

Demerara-Mahaica (Region Four) and Mahaica-Berbice (Region Five) were then identified for the knowledge, attitudes, perceptions and behaviour studies, which was completed in November 2016. From these projects, it was discovered that residents in Regions Nine and Seven had a better understanding of what climate change was and were better able to relate what was taking place in their regions, as opposed to those persons on the coast.

Ms. Christian noted that the film is just one of the many projects that the OCC has started, to address the gap in knowledge and understanding with respect to climate change, making reference to a recently approved project, which saw the creation of two posters highlighting the impacts of climate change on the coast and hinterland, along with solutions and adaptation measures.

Minister of Public Telecommunications, Mrs. Catherine Hughes, Resident Representative for the UNDP, Ms. Shabnam Mallick, members of the Private Sector, Government agencies and the public were in attendance.