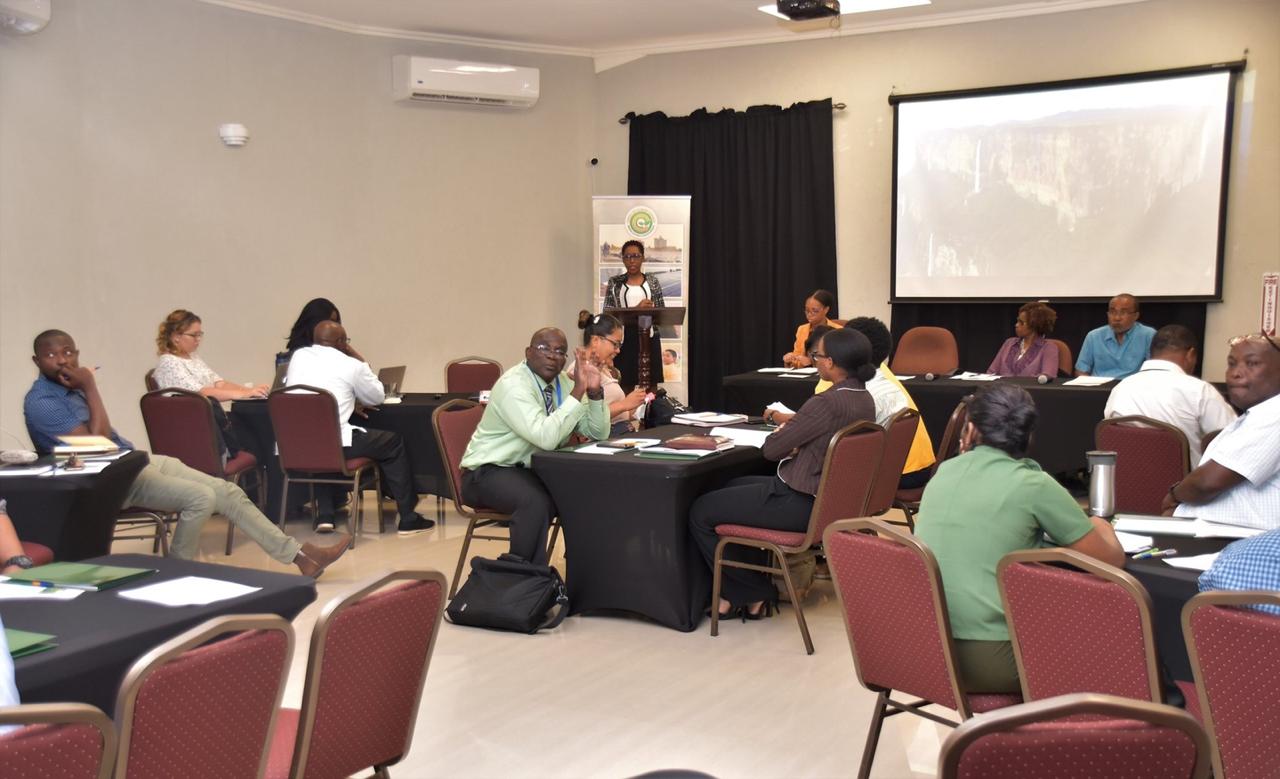 The Office of Climate Change (OCC) with support from the Food and Agriculture Organisation of the United Nations (FAO), this morning, opened a four-day workshop which seeks to revise and re-submit Guyana’s Nationally Determined Contributions (NDCs).

This is in keeping with the global call for Parties to the United Nations Framework Convention on Climate Change (UNFCCC) and the Paris Agreement, to increase their climate change mitigation ambitions, in accordance with the Intergovernmental Panel on Climate Change 2018 Special Report on 1.5 0C to cut global greenhouse gas emissions by 45 per cent by 2030 and achieve net-zero emissions by 2050.

To this end, all countries are required to submit new or revised NDCs with increased ambitions by December 2020.

The purpose of the Capacity Building Workshop is to introduce participants to the elements and requirements for the NDCs update in keeping with the Enhanced Transparency Framework of the Paris Agreement Work Programme.

Head of the OCC, Mrs. Janelle Christian, in her remarks, said the first NDC was started in 2014 and concluded and submitted in 2015, in time for the Paris Agreement. However, since then, Guyana has elaborated several new national development priorities and strategies including the Green State Development Strategy (GSDS), and has started petroleum production. Mrs. Christian noted that these recent developments would have identified the need for a revision of the NDC. Other sectors including the agriculture and transport sectors, would also have to be included in this revised NDC, she said.

“As part of the revision of our NDCs, which is in keeping with the commitment for all countries to increase our ambitions by 2020, we will now be including additional sectors to ensure that we achieve those ambitions. As articulated by the GSDS, Guyana will be pursuing those ambitions through the introduction of electric vehicles. We cannot continue with business as usual as it relates to the purchase of motor vehicles in this country. As part of the new NDCs, Guyana will be including the agricultural and transport sectors since agriculture is also a contributor to the greenhouse gases,” she said.

Mrs. Christian noted that under the Paris Agreement, the expectation is that countries would have progressively ambitious NDCs and as such, the aim is to ensure all sectors are included this time around.

“We would like to have all of our sectors included so that we would truly have a national document… This requires the participation of all stakeholders, especially those who will be required to implement tangible actions. It is our expectation that the consultations would continue throughout the year and the NDC would be ready by September for the Conference of Parties in November. We would like to have a document that is realistic, one that has clear targets and baseline and indicators for measurement and monitoring,” Mrs. Christian said.

FAO Resident Representative in Guyana, Ms. Gillian Smith, in her remarks, said the FAO is pleased to collaborate with the OCC on this important work that Guyana is doing to develop its next NDC. She noted that Guyana has already signalled its strong intent to answer that call, but it is a task that requires a lot of planning, investment and cooperation between national counterparts and stakeholders at every level.

Ms. Smith noted that the agriculture sector is an important one in the fight against climate change and as such, the FAO is supporting countries such as Guyana in its efforts through the formulation of its revised NDCs.

“Climate related disasters are becoming more frequent; floods, hurricanes, droughts, forest fires, rising sea levels all affect the dimensions of food security. This is going to require that we work together and come up with programmes and investments that holistically address the reduction of greenhouse gases and the enhancing of the removal of greenhouse gases from the environment. In doing this, we can create, complement and contribute to more inclusive, sustainable and resilient food systems that consider economic, social and environmental impacts of climate change. The agriculture sector has been selected as a priority sector by most countries for adaptation to climate change and we are working on opportunities to support those countries to include agriculture in the NCDs and to make meaningful contributions to those NDCs,” she said.

Meanwhile, Lead Facilitator of the Workshop, Mr. Leon Charles, in his remarks, said the preparation and communication of NDCs is a mandatory, legally binding obligation under the Paris Agreement and Guyana is leading the way in the Caribbean Community (CARICOM) region in the inclusive approach it is taking to develop its NDCs.

“I am pleased to note that your NDC is not being developed in a vacuum but comes as a part of climate change policy and legislative development that you have undertaken over the last few years, including the National Climate Change Policy and Action Plan; the REDD Plus strategies and the Renewable Energy Roadmap, all within the framework of the GSDS. These provide a coherent framework to address the challenges brought on by climate change. Our work here today then is to ensure that Guyana’s NDCs meet the requirements set out in the Paris Agreement,” he said.

Following this initial workshop, consultations will be held over the next few months before the draft NDC is produced for submission.