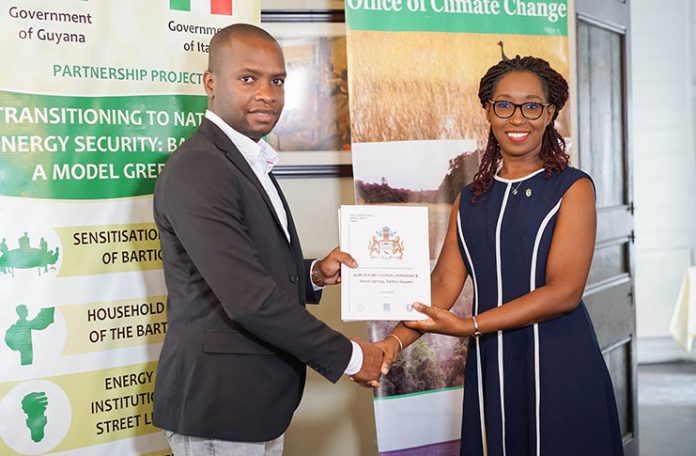 …making Bartica a ‘green’ town, one project at a time

AS Guyana forges ahead with it's Green State Development Strategy, President David Granger has envisioned Bartica (Cuyuni-Mazaruni) as the first ‘green’ town in Guyana and the Caribbean, leading in areas such as renewable energy, electric vehicles and environmental stewardship.

One of the key drivers of this vision is the Office of Climate Change (OCC), which is headed by Mrs Janelle Christian. The OCC is determined to play its part and has been quietly doing that for the past two years in the town of Bartica with funding from the Italian Government and the Japan-Caribbean Climate Change Partnership (J-CCCP).

THE ITALIAN SUPPORT
In June 2017, the OCC launched the first phase of the US$650,000 “Transitioning to National Energy Security” (TNES) project, which has seen the gathering and compilation of data on energy use to inform evidence-based decision making for the future implementation of projects and programmes.

In simple terms, Mrs Christian explained that the Italian support was focused on gathering the necessary baseline data that was needed to inform the kind of actions or projects that were needed on the ground, which could have been implemented in an effective way and with scientific data to back it up.

She noted that it, therefore, saw the completion of all the energy audits, public awareness exercises and an energy data management centre established. This phase was the most critical component as it collected data, which can be used by all government agencies and ministries to determine how programmes are rolled out in the town.

Mrs Christian said given the fact that Bartica is a new town, there was a lack of adequate information to determine the types of projects that should be implemented to aid its pursuit of becoming a ‘green’ town. This first phase, therefore, ensured that a repository for Bartica was established and in place.

“So under the Italian support, we would have successfully completed all of the studies largely focused on the household baseline survey to get a sense of behaviour and practices as it relates to how people use energy and whether they are aware of certain concepts. It is important for us to spend very wisely and so the work conducted in Phase one is the basis for which we will identify tangible projects. There are also some agencies that will be using these reports to roll out programmes, for example, the Guyana Energy Agency has already used one of the reports to determine how it is going to make decisions for the town with regard to projects so it is not just about what we are doing, it will be available and can be used by all agencies,” she said.

The data generated from this pilot will be used for future measurements and predictions for evidence-based decision-making and pursuance of projects and programmes.

Coming out of the various audits and studies conducted in the US$650,000 phase one of the project, were several recommendations, including the change out of incandescent bulbs and the installation of LED lights.

With support from the J-CCCP and the United Nations Development Programme (UNDP), the OCC was able to procure and install over 200 LED street lights across several communities in Bartica. The Ministry of Public Infrastructure, Ministry of Communities and the Guyana Energy Agency (GEA) also came on board and together, over 800 lights were jointly installed across the township.

Through this pilot project, the teams were able to conduct studies to determine the kind of LED lights that were most needed, what types work best in the town and its suitability to the level of darkness in the communities. According to Mrs Christian, it was a well thought out pilot project, which really spoke to the needs of the town.

Mayor of the town of Bartica, Mr Gifford Marshall, said that through this initiative, approximately 97 per cent of the township is now outfitted with the street lights and over 5000 residents are directly benefitting.

Mr Desmond Stoby, who is a resident of Four Miles, which has benefitted from street lights, said that the residents of that community are now feeling safer and more secure while embracing the change since they are ‘green’ alternatives.

“We are really enjoying the street lights we have. I personally and most of the residents welcome those street lights. It used to be so dark and people used to be afraid to walk, but not anymore. It is really something good and I really appreciate it. I want to join with the residents to applaud this initiative. I love it and the residents love it,” he said.
Patricia Mull from Two Miles Housing Scheme also benefitted under the project. She, too, has expressed sentiments of gratitude, as she noted that it has really brought relief for residents.

“I have to say a big thank you for this project at this time. We had lights but they were very far apart and persons were afraid and even grocery shops were closing during the afternoon hours and we couldn’t access certain things after certain hours. So now that these lights are there, we can come out and we feel much safe,” the woman said.

Mayor Marshall said that the lights would have had a tremendous impact on the development of the town and its transformational process. “This, of course, enhances our security, boosts tourism and do so much for our town and so we are very grateful,” he said.

SOLAR ENERGY AND STEM CLUBS FOR SCHOOLS
The OCC works to ensure that its projects are well rounded, impactful and designed to create the best changes they can. During its work in the town, the OCC was informed that the Three Miles Secondary School was experiencing severe difficulties due to a lack of reliable electricity supply. Given the fact that the school features a dormitory, which houses students from far-flung communities in the region, there were food and meat spoilages and students were unable to properly prepare for classes, study or complete assignments.

A sustainable intervention was urgently needed and the OCC took up the mantle. Through funding from the J-CCCP, the Climate Change Office was able to install a Photovoltaic System (PV), change the incandescent lights and procure a solar freezer for the storage of food. This system directly benefits approximately 65 students at the dorms.

“Back in 2016, Bartica would have gone through a period of constant blackouts and so we looked at access to education and how this was affecting the students. So we felt it would be useful to have lights in the night. It was on that premise that we worked but we completed the change out of the incandescent bulbs in the schools, the installation of the PV system with the grid-tied to battery back-up for at least six hours. The Teachers’ quarters were also connected to the system and we also facilitated a solar freezer. Sustainability is also important and so we felt it necessary to have folks there that can facilitate repairs and maintenance to the system that was installed and through the project, we were able to train six individuals from the town to do that,” she shared.

Housemaster at the Three Miles Secondary, Mr Ricardo Allen said that the installation has made life more comfortable for both the teachers and students since they have been plagued with frequent blackouts and food spoilage in the past.

“This has really improved our lives. This is a really good initiative the governments have taken on to improve our lives. When we have a blackout, the children do not react in a nice way; they run and scream and so on and so this is the best thing they could have done here for the students. They are in a better frame of mind and it's helping the students in a good way,” he said.

Further, through the phase one of the Italian Government-funded project, 12 teachers from Bartica, along with four community stakeholders underwent a one-day training workshop in Science, Technology, Engineering, Mathematics (STEM) and Robotics, aimed at equipping them with technological skills, which can assist in providing modern solutions to the challenges of transitioning Bartica, Cuyuni-Mazaruni (Region Seven) to the first model ‘green’ town in Guyana and the Caribbean.

Based on this workshop, which was held in February 2018, two STEM clubs were established at the Three Miles and Bartica Secondary Schools and have seen active participation in the national leagues. To date, more than 150 students have been trained in the two schools in this area.

PIONEERING BARTICA’S E-VEHICLE FUTURE
The second phase of the Italian Government-funded project is slated to begin in a few months’ time at the cost of US$725,000. This phase will look at three main areas: a feasibility study for electric vehicles (e-vehicles), procurement and deployment of a pilot e-vehicle and capacity building in this area.

Mrs Christian said that the GSDS speaks to the introduction of E-mobility vehicles and the OCC is taking up this challenge. She noted that while discussions are still ongoing, the office is considering an electric school bus or E-Scooters, which can be part of the pilot in the township.

“We are ready to start phase two and the intention is to consider a school bus or e-scooters since Bartica is relatively small but of course, this will have to be informed by the feasibility study and what is most applicable. I can tell you that I am very excited about it,” she explained.