Georgetown, Guyana – (August 21, 2019) Minister of State, Mrs. Dawn Hastings- Williams, yesterday, travelled to Kurukubaru, Potaro-Siparuni (Region Eight) to get a first-hand look at the challenges facing the community, following a request residents made to her for foodstuff.

In a letter to the Minister, the residents outlined that due to heavy rainfall since April their farmlands had become flooded, resulting in them being unable to grow and reap their main staple, cassava. As a result of this situation, the village's earning power and food supplies had become depleted and residents were forced to seek the intervention of the Government.

In addition to the food supplies from the Civil Defence Commission (CDC), Minister Hastings-Williams met the Village's Toshao, Mrs. Viola Melville, members of the Village Council and representatives from the CDC and the Ministry of Agriculture to discuss some possible solutions to the challenges that they are facing, interventions which can be made by the Government in the short, medium and long term, and the possibility of the diversification of crops.

Extension Officer at the National Agricultural Research and Extension Institute (NAREI), Ministry of Agriculture, Mr. Michael Liverpool noted that the cassava cannot tolerate large amounts of moisture or water, which would hamper its growth or cause it to rot. He indicated that this result would have been discovered in most of the communities in the Region but Kurukubaru seems to be the worst hit and as such, required the assistance of the Government. 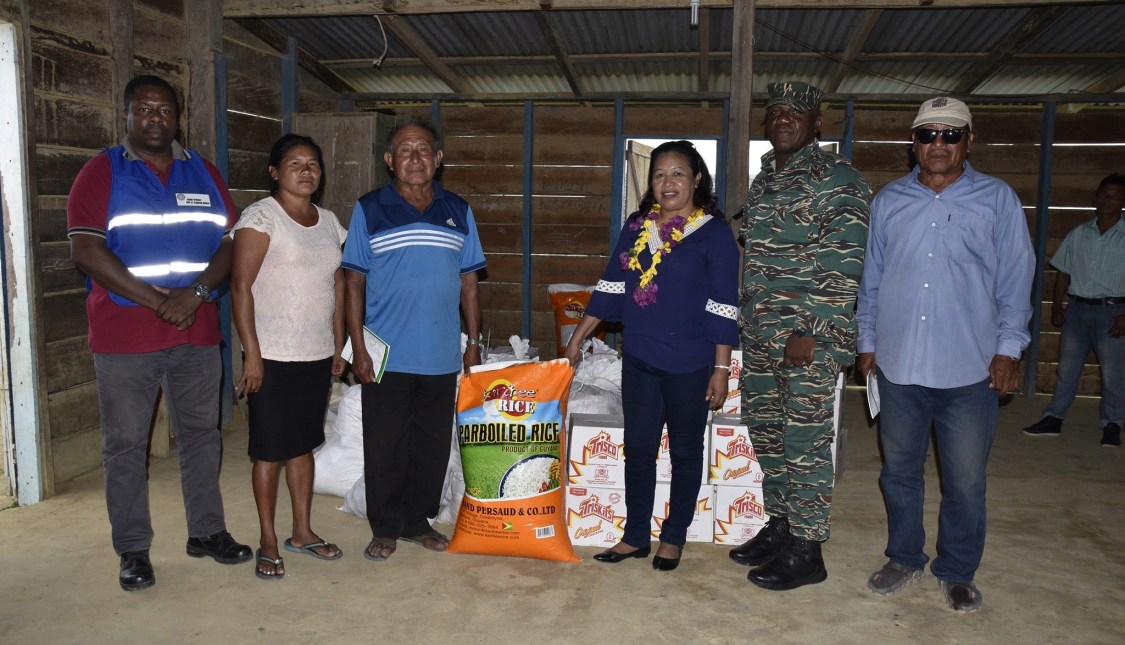 Minister Hastings-Williams, in her remarks, said that as much as cassava is a staple and traditional food of the Indigenous peoples’, the adverse effects of climate change are becoming more visible and therefore, steps would have to be taken to make the communities more resilient and sustainable.

In this regard, she noted that residents must be prepared to adapt to different foods, particularly since a lack of diversification can result in a food crisis. The Minister of State proposed crop rotation and diversification, so that food security does not become a reoccurring issue.

“We have to work together to see how we can overcome these challenges. You will have to start preparing to combat these challenges, which are now becoming the norm. We have to ask ourselves how we can prepare. We have got to start thinking about alternative ways of farming, trying different produce, which you can use during the months it will take to grow the cassava. You have to think of ways and means to add value here. You have to try and do more planting and we will get you the seeds so you have more foods that can be grown faster. While you await your cassava for eight months, you can have other foods in between. You can also mass produce your farine when you have the cassava and ensure it is stored properly for the months when you cannot [produce],” she said.

Further, the Ministry of Agriculture’s representative proposed the use of different varieties of cassava sticks as well as the introduction of other methods for the cultivation of cassava. The CDC and the representative have also committed to having the soil of other parts of the community tested so that new farmlands can be established to mitigate the problem.

The Minister of State noted that she will engage Minister of Agriculture, Mr. Noel Holder to ensure that the Ministry lends its support to the community.

“We are going to work with the Ministry of Agriculture to send you some of the assistance that you… need. The Government will support you and we are here to listen and assist,” the Minister said.

Additionally, Minister Hastings-Williams told the villagers that she is willing to facilitate the training of a young person from the village to become an Agricultural Extension Officer so that they can be better served. In this regard, the Toshao has been asked to identify the person and inform the Minister for action to be taken.

Following the meeting with the residents, the Minister of State took the opportunity to visit some of the farms affected to get a direct look at some of the farming concerns raised by the villagers.