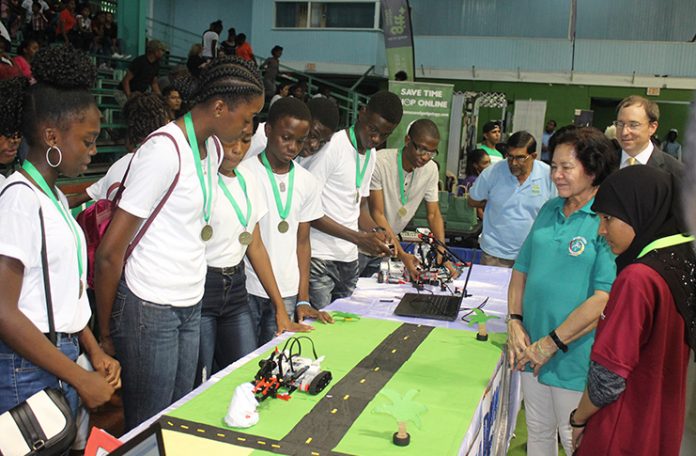 COGNISANT of the irrevocable role of technology in the local and global economies, STEM Guyana hosted its second annual Robotics exhibition, with the aim of helping Guyana to embrace

Speaking at the Cliff Anderson Sports Hall on Saturday, where the exhibition was held, First Lady Sandra Granger stressed, “You must embrace technology because technology has already embraced us even though some of us don’t think about it,” and added, “Our lives are attuned to technology.”

She explained that embracing technology will enable persons to become “relevant” in the 21st century and thus knowledge in Science, Technology, Engineering and Mathematics (STEM) is crucial.

“In a few years, 60 per cent of our jobs will be done by computers, 70 per cent will require knowledge of computer science and 90 per cent of the jobs being done by women will become obsolete,” the First Lady said.

In keeping with this, STEM clubs from across the country had their robot creations on display at the exhibition. Each robot illustrated the very same sentiments that the First Lady advanced, that robotic solutions are the wave of the future. 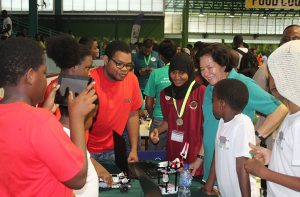 The Belladrum Stem club for example, which was awarded at the exhibition for being the most outstanding club, had designed their robot to separate recyclable and non-recyclable waste materials. The Kuru Kururu STEM club had a bot modeled after an oil rig. And, even the Tuschen Deaf Academy showed that they were not to be left out of the wave of technology consuming Guyana with their snake-lit robot.

The 2017 Team that represented Guyana at the First Global International Youth Robotics Competition also had on display their ‘Megathurium’ robot and playing field.. The robot was designed to address the issue of depleting clean water reserves.

With the youth taking the fore of addressing solutions through the use of technology, the First Lady highlighted the role communities have to play in ensuring that children can become involved in technology. Here, the First Lady singled out the Belladrum community as one where she has seen a communal spirit to foster the children’s development in STEM.

Adding to the First Lady’s sentiments was founder of STEM Guyana, Karen Abrams, who pointedly said, “We’re here because we’re trying to expose our young people in Guyana to technology. We want them to be able to get a job in the next 25 years; we want our young people to be prepared for those jobs.”

Speaking to the Guyana Chronicle, Abrams noted that since 2016 when the robotics camps were first introduced, Guyanese have been more attuned to technology.
“I feel like STEM Guyana inspired a movement in Guyana and it’s a movement that I am proud of,” she said, highlighting that the technology industry was greatly developed and stakeholders like the private sector, diaspora and government have been eager to develop it.

Recently, 18 teams from various communities developed STEM clubs and participated in the National Robotics and Coding League, showing that this technology has been spreading across Guyana. Abrams disclosed, “We want to have 100 teams, and it’s not impossible because we’ve had enquires from almost 100 teams.” But she noted that the process of streamlining has taken some time because the organisation has to work to “iron out the kinks” to better accommodate the teams.