Since his assumption to office, President Granger has placed Guyana squarely on the path towards the sustainable exploitation of resources, and the protection and proper management of the environment as this small South America country takes up the giant task of using its resources to combat the effects of climate change and global warming.

The Government of Guyana, through the Office of Climate Change (OCC), has been working assiduously with all stakeholders to take collective action to mitigate the effects of climate change across all sectors. The OCC, which falls under the purview of the Ministry of the Presidency (MoTP) over the past two years, has been making great strides in advancing President Granger’s ‘green’ agenda through tangible, transformative initiatives at both the community and national levels.

Education plays a critical role in rallying local, national, regional and international buy-in, and the OCC is cognisant of this fact.

As is the popular saying, “an investment in knowledge pays the best interest”, and with this in mind, the OCC in 2017 launched its Schools Outreach Programme. The programme, which targetted 20 schools in 2017 and 51 primary, secondary and tertiary educational institutions in 11 districts in 2018, focuses on climate change education and sensitisation and what it means for Guyana. It is a collaborative effort between the OCC and the Guyana Youth Environment Network (GYEN), formerly known as the Caribbean Youth Environment Network (CYEN).

The first workshop with students was held at St. Gabriel’s Primary School in 2017, and was aimed at teaching the schoolchildren about the impacts and effects of climate change.

Ms. Yasmin Bowman, Communications Specialist at the OCC, explained that part of ensuring climate change resilience is ensuring that there is an educated populace, and as such, the OCC thought it wise to undertake these sessions.

“Since Climate Change is affecting the world,” she said, “Guyana has not been spared of its effects. We [the OCC] believe that our young ones should be enlightened and informed about climate change, because, from our experience last year, we’ve noticed that a number of our children are not informed at all about climate change…

“We’re targetting both primary and secondary and also tertiary institutions throughout the year. We have post-secondary schools as well. We want students and young people to know how Guyana is being affected, and ways in which they can adapt to change in climate.

“We also want to keep the public informed about our efforts, and what they as citizens can do to contribute to the ‘green’ agenda. As such, apart from education and awareness, we hope that these sessions can see Guyanese youth as agents of change.”

Ms. Bowman also noted that the sessions are designed to ensure that the delivery is tailored to match each school through a unique interactive approach, which is appropriate for the students’ level of understanding.

For instance, at the St. Ambrose Primary School on March 22, 2018, a short film, ‘Siege on my land, Guyana’s Battle with Climate Change’ was shown. The video, which is done in animation form, detailed the effects and causes of climate change, providing definitions for vital terms, and showcasing solutions for adapting to climate change, among other related areas in a way that the students at that level could relate to.

Subsequently, the team conducted an interactive session, where the students were quizzed on what they learnt from the video and given prizes.

“The primary and secondary levels are somewhat different in the way the sessions are presented,” Ms. Bowman said.

“In both cases, the sessions are interactive. Then there are re-enforcement sessions and exercises at the end of each engagement. At the primary level, we are focussed on discussing key terms and words, followed by group activity in the form of a word search. “At the secondary level, after the interaction, the students are divided into groups as well and are given the opportunity to draw a Sustainable Community, based on their understanding of Adaption and Mitigation.

“At the end of each session, each school is also given two posters specially designed for youth that focus on Climate Change Adaptation and Mitigation on Guyana’s coastland and in Guyana’s hinterland. “These sessions are extremely important to the work and mandate of the office, because it is helping our young people to be knowledgeable about climate change, and what are simple things that they can do to mitigate the effects.”

More than students, the OCC has been able to educate teachers who sit in on some of the sessions. These educators are, in most cases, happy to participate and to take the message forward.

St. Ambrose’s Grade Six teacher, Ms. Sharon McAlister described the sessions as informative, and urged the OCC team to conduct more sessions during the course of the year. “I think that this programme is very informative for the students,” Ms. McAlister said, “and as I mentioned to the team, I wish that they would come a bit more often, because the session was very interactive, and the children were able to grasp and understand the whole concept of climate change.”

Headmaster of the All Saints Primary, Mr. Bassant Jagdeo, who sat in on the session facilitated at his school, said that the initiative is commendable, and must be taken across the country so that behavioural changes can be achieved for the good of the environment, and the country as a whole.

“I really appreciate this, and not only on my behalf but the entire school population. The kids are the ones that we have to target, and the ones who need to become more aware,” Mr Jagdeo said, adding:

“I know that a lot of the adults are neglectful in their actions and saving our earth, but if we can start with the youths, then we are going to have a positive reward in years to come.
“This is a very great initiative, and we should not only target schools, but homes, too, need to be a part; parents need to be involved, because this starts from the home.”

Headmistress of the Rosignol Secondary School, Ms. Oluremi Anthony said that she was most elated that her school was selected to benefit from these awareness sessions. She noted that as a teacher, she was also able to benefit from the session, and her students are now better informed on climate change and its effects, and how they can contribute to the process.

Students are not the only ones targetted in the OCC’s education drive to effect behavioural change. On July 28-29, 2017, the Office hosted a series of workshops for journalists and Government Public Relations Officers (PROs), which focussed on the communication and dissemination of information on the country’s steps to mitigating and adapting to the effects of Climate Change.

The sessions, which were hosted at the Cara Lodge Hotel, were conducted by the Government of Guyana in collaboration with the International Institute for Sustainable Development (IISD), with funding from the United States’ Department of State. It is part of the National Adaptation Plan (NAP) Communication Strategy development process. 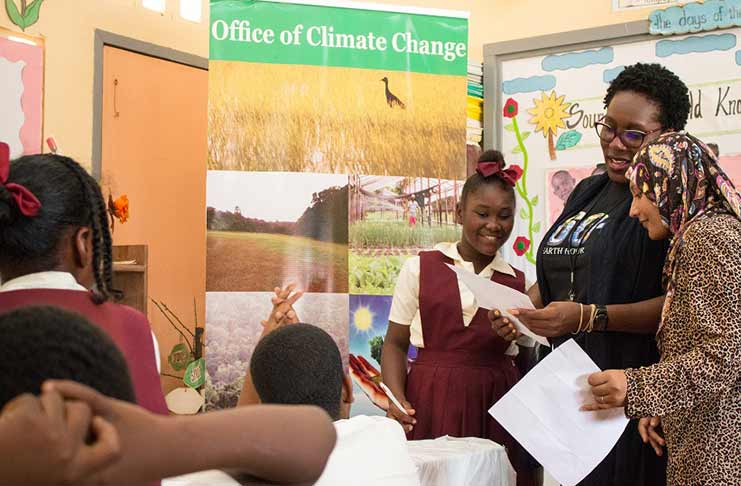 More than this, however, with climate change and global warming becoming greater concerns, particularly for Small Island Developing States (SIDS), the OCC understands that Science, Mathematics, Engineering and Technology (STEM) has a role to play in mitigating risks associated with these phenomena.

In this regard, in January 2018, 12 teachers from Bartica, along with four community stakeholders, underwent a one-day training workshop in STEM and Robotics, aimed at equipping them with technological skills which can assist in providing modern solutions to the challenges of climate change, and transitioning Bartica, Cuyuni-Mazaruni (Region Seven) to the first model ‘green’ town in Guyana and the Caribbean.

Noting that robotics itself offers innovative possibilities for developing waste management and energy generation solutions among other things, Project Manager of the Bartica Transitioning to National Energy Security Project, Mr. Gavin Bovell, explained that the OCC is cognisant of the fact that science and technology play a critical role in developing solutions to many common issues.

Following this, the OCC, on February 27, 2018, in collaboration with STEM Guyana and the Caribbean Community Climate Change Centre (CCCCC) or 5Cs, launched the STEM Bartica Programme at the Three Miles Secondary and Bartica Secondary schools.

Speaking at the launch, Head of the OCC, Ms. Janelle Christian explained that a pillar in the fight against climate change is the involvement of young people. “We often talk about our young people being the future, but, how do we get them involved?

We need to build skills, starting now. We need to build their confidence; we need to expose them to new technology, tools and concepts, so that they will be confident enough to fill those leadership roles that we often abstractly speak about,” she said.

As the world continues to grapple with the effects of climate change and the effects continue to be felt by countries in the Caribbean, President Granger is lobbying for a broader platform to effectively provide protection and relief to Caribbean States that are vulnerable to natural disasters.

In the meantime, the OCC will continue to play its role in educating the populace, one student at a time, the achievement of the ‘green’ Guyana and a ‘good’ life for all Guyanese.